One on One with a church planter’s wife

A few months ago, Terry and I were in the beautiful city of Masstricht in the Netherlands. Our church in Maastricht is lead by Bert de Hoop. Whilst Terry interviewed Bert, I spent some time chatting with his wife, Mariam (in front of a camera too!)

Once a year my three sisters and I try to get together for a few days. Scattered as we are across the UK it provides a great opportunity for fun, fellowship, recalling our childhood days and sharing news  of our children and grandchildren.

And so a starry night in August found us lying on the grass at Angela’s house in Yeovil gazing up at the twinkling lights, hoping to see shooting stars or ignited bits of space debris. The conversation went something like this:

“Missed it again, I never see them!”

“Speaking of celestial spheres, which one has your church joined?”

“Don’t you mean “apostolic”? Hope we are still firmly on the ground!”

“So which one are you in then?”

“Well, it used to be up north, but it’s more central now. Grand Central I think.”

“No you can get to it from Euston.”

“Oh. Like the one we’ve joined, the Underground….or is it Groundswell? Ground something…(sings) “Underground, Overground, wombling free…” Something to do with being near Wimbledon Common perhaps.”

“They’ve gone all ecological haven’t they? MacDonalds I mean.”

“It’s more political than that; Coalition, that’s it.”

“Sounds like an accident, two spheres colliding. Do the leaders have to wear yellow ties?”

“No, they never wear ties, but I’ve seen them wear yellow wellies, at that camp in the west.”

“Oh, that was at Emission! Told you it was ecological.”

“You’re getting muddled with the Midlands lot, you know, Analyst. They have all the brainy scientific churches there.”

“Analyst sounds a bit introverted; not very outgoing. Not like Radical Mission”

“Aren’t we all though? “Relational Values”, that’s what it is. No, hold on, “Friends and Relations.”

“Must’ve got that wrong! That’s from Winnie the Pooh! Rabbit’s Friends and Relations!”

“Winnie the Pooh? We used to get everything from the Bible!”

“Remember when Mum used to read to us? Winnie the Pooh, and the Bible; all sorts of stuff.”

We were all Morgans then – Wendy Morgan, Angela Morgan, Josephine Morgan and Susan Morgan. Now we are Wendy Virgo, Angela Alsop, Josephine Garbutt and Susan Hall; still sisters though, still family. Still love being together, sharing what we hold dear, our history and hopes for the future.

It’s great being family, whatever we call ourselves. 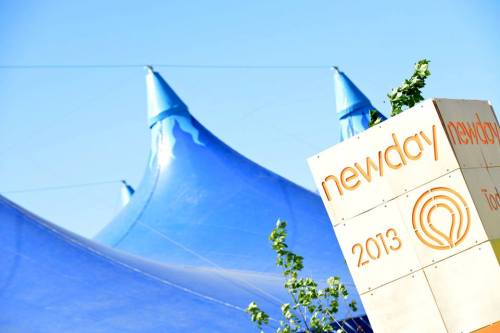 I snuck in to Newday! The lovely Phil Gray organised a badge for me which was waiting at the gate. Sad to say, I whimped out of actually camping. My friend Carol Bailey had kindly offered her pop up tent, and it was either that or a room at the Premier Inn over the road. I thought about it long and hard….all of 20 seconds, and well, you know, a bed, a shower, an electric kettle…not much of a contest really.

I delivered the box of food which had got left behind at Kingston to the church site, glad that our kids would not miss out on the green Thai curry specially cooked for them….and helped them eat it. They were all happily organised in their tents and although I am about a century older than them they made me feel very welcome and involved.

As evening approached, I found it moving to see thousands of young people streaming toward the Big Top, excited and eager to begin praising God together. They poured in, 7,000 of them, and as Simon Brading began to lead them into worship, the sound swelled rapturously as they clapped, danced and stamped. Lights blazed and drums boomed as guitars  and keyboards played the melodies of Simon’s new songs.

I also appreciated that older songs were in the mix, and there were some very poignant moments, especially after Stef Liston preached a profound and wonderful sermon on Simon Peter on the second night. (Get it on podcast, simply entitled ‘Fish’). We were led into “I love you Lord, and I lift my voice..”, and a hushed stillness prevailed over the huge tent as some knelt or lay on the floor or stood with arms raised in worship. That night, no one was in a hurry to go back to nightcaps of hot chocolate and cake; the presence of God took over. 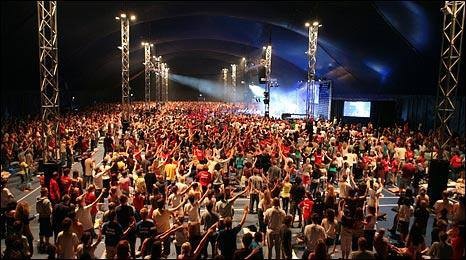 Highlights for me were Joel’s series on Jonah with the older teens in the mornings; meeting up with loads of old friends who had come simply to serve the youngsters; watching my grandchildren absorbed in worship; chatting with our Kingston church group over lunch.

I kept bumping into people whom I have known as babies and children but who are now all grown up! And yes, many were the blunders I made, simply because they now look so different. I mean, when you last saw a kid of 13 who is now a giant with a bushy black beard, is it so surprising that you wonder who he is? Or a stunning blonde young lady who simply called herself Vicky….I remember her and her twin when they were 5years old, waking me up at 5.30am to play snap. Please forgive me, all those whose names I didn’t remember; my grey cells are not as agile as they once were, but also, I am bad at making the connections when I think of (some of) you in the context of another country!

What stuck out to me was that amongst all the fun, hilarity, and youthful exuberance there was a seriousness, an intentionality, a desire to seek God, find his will, walk in his ways. It helps kids, in small churches especially, to be in a massive event which shows them that Christians are not some poky archaic little group, but a force to be reckoned with; where there is freedom to express worship in a genre appropriate to their age range, where there are opportunities to ask questions, to talk to leaders, to find friends old and new; and especially to be in a context where they are confronted with God’s mission to the world, and encouraged to find their part in it.

I was also struck with the maturity of the teaching: a strong foundation of theology (which I hope is being laid in all Newfrontiers churches) is being reinforced by such noted teachers as Andrew Wilson and Joel Virgo,  and to my delight, younger teachers whom I had not met before, who are now carrying the baton in this next generation.

All the time God was encountering these teens: some were being saved, some returning from wandering away, some were healed, and many were finding direction for their lives. I was only there four days, but I feel profoundly blessed and deeply convinced that this event must continue for many more years.

Torrential rain nearly destroyed Newday at its birth a few years ago. The local authorities said we should abandon the ground, but God had given us an amazing promise that this conference had national significance: a promise we never even received for the massive Stoneleigh Bible Week!

We refused their advice to abandon ship and experienced an amazing week. Every year has surpassed the previous years. Thousands of teenagers’ lives have been radically changed. Who knows what the future holds for this coming generation and what a vital role Newday will play in the shaping of a new generation for the glory of God?  Few conferences have genuine national, if not international, significance. Few conferences are preparing a new generation. Long may it continue. Long may Jesus be glorified because of Newday.

I make a plea, rooted in a prophetic statement: we can do more together than we can apart! Newday must go on!