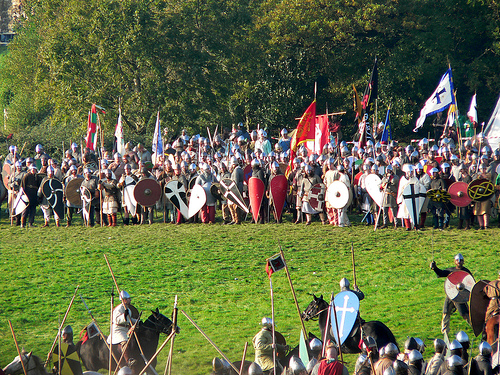 It was that rare thing, a glorious sunny Sunday morning. Being Sunday the traffic was light as we drove south through the lush Kent and Sussex country, revelling in the fresh spring foliage, thick clumps of cow parsley in the long grass bordering the roads and fields of buttercups, warm and golden. Cows looked sleek and lambs were large and fat. England at its exuberant, June best! We were on our way to King’s church high on the Ridge at the back of Hastings. We smiled as we passed the sign, “You are entering 1066 country.”

1066 is the date that everyone knows, immortalised by the battle of Hastings fought between the invading Normans led by  King William, and the Anglo-Saxons led  by King Harold. It was a day that shaped the rest of English history, a seminal day, a hinge, a page turner; for William won and became known as William the Conqueror, and the Norman French poured into England bringing new words, ways, ideas, furniture, food and fashion, expanding, enriching, changing the culture. A picturesque village now stands near the battle site, appropriately named Battle.

A few miles away, other battles have been fought and won over the last 35 years. Terry and I lived in Seaford, a small town to the west. One day a man called Don Smith contacted us. He worked in Hastings hospital, and originated from South London. He had recently been baptised in the Spirit and was gathering a dozen or so people to pray and worship in his basement flat. He hooked up with us and joined our exploration into radical church restoration and planting.

Over time, the little nucleus grew and began to meet publicly in schools and halls. As they outgrew each one they were always looking for another! They were truly a church on the move! Eventually they bought a massive building on the hill above the town which had started life as a sports centre for indoor cricket and tennis. Bravely, the little crowd entered the vast intimidating space. It was ludicrously huge, but they kept dreaming, planning, praying and growing in numbers and faith.

The church went through various phases of leadership change. Don Smith moved on to Eastbourne to plant another large and excellent church. John Groves led for several years eventually moving on to Winchester. Currently his son in law Paul Mann leads the eldership team. The church became a sending base and  learnt to give generously in terms of money but also people to other church plants.

The building also went through various metamorphoses as the vast space was sensibly used and managed. Its present stage is now nearing completion. Being strategically placed opposite a large hospital, it is highly visible and can offer facilities for hospital visitors such as low priced parking and a lovely coffee shop with views over the beautiful countryside. There are lots of side rooms where activities such as Alpha courses, youth events and debt counselling are proving fruitful. New offices are under way, and the large well appointed main auditorium can comfortably seat 700+ worshippers.

This Sunday morning, as the worship team took the stage and led us into 40 minutes of glorious worship, my heart was full of thankfulness for the battles fought and won on this bit of turf. It is difficult to imagine how bare and inhospitable this building appeared when it was first acquired; still more difficult to visualise the original small group meeting in Don Smith’s basement! That was the mustard seed from which this beautiful tree has emerged. Doubtless there are more battles ahead; but the church is vibrant, flourishing, growing, alive!

King William 1st came and conquered and changed history. Our King has established a kingdom that will never pass away. I am praying for just as radical an impact for this Kingdom to make on our culture in our day; that will make inroads into government, education, business, economy, justice, family life…..everywhere. There are more battles ahead, but also more victories. Keep praying, keep believing!