I had left my bottle of water in the car overnight and in the morning it was a solid block of ice! Yes, it was cold, 21F, but the sky was clear blue, and frost sparkled on the trees. We drove into the west entrance to the park on a road that followed a bubbling river. Perched on a dead tree overhanging the water we saw a massive bald eagle, its white head slowly turning as it watched for fish. We watched it for a while through binoculars then drove on through the breathtakingly beautiful countryside.

I had no clear expectations of Yellowstone before we visited it and was completely amazed at the variety of terrain, its beauty and its unique features. There were wide grassy plains where we saw large herds of buffalo (also known as bison), grazing, and at one point we came across one right by the edge of the road. It didn’t seem at all perturbed by our presence but kept its massive head low and continued placidly chewing grass.

We also saw antelope and elk, some magnificent with many branched antlers. Of course, what we most hoped to see was a grizzly, or a black bear. Sadly these eluded us, but there was an education centre near the hotel where we were staying where six grizzly bears and a pack of wolves live in an enclosure. These impressive animals have been rescued having been in some way rendered unable to fend for themselves and are now providing the public with opportunities to observe them at close quarters.

We watched the wolves racing around their enclosure looking for food, and attacking bits of carcase with relish. The bears grabbed pumpkins and ripped them open, and one simply stood on his and squashed it!

Perhaps the most famous and strange feature in the park are the hundreds of hotsprings. The whole area is a massive volcanic caldera, and it is weird and fascinating to look across a beautiful landscape of rivers and mountains and see clouds of steam rising from springs and pools. The cold weather intensified the outpouring of steam, and clouds billowed up everywhere. Sometimes gushing hot water bubbled up, and sometimes steam just floated up from vents in the ground.

The most famous is Old Faithful. Apparently it used to be so predictable you could set your watch by it, but now it is not so consistent. We arrived just after it had erupted, so we hung around for the next one, which was expected to be in another hour and a half or so. It is a geyser which shoots into the air for several minutes, reaching heights of 60 to 80 feet. A large semi circle has been fenced off with a railing around which crowds gather to watch. As we were late in the season, not many people were touring the park. It was freezing, so we were grateful for a sheltered visitors’ centre where we could wait and view a well-put together exhibition explaining the geology of the area.

As the time drew nearer, we ventured out to watch, cameras at the ready. As luck would have it, it kept us waiting, but eventually, a spectacular plume of water shot into the air accompanied by a great pillar of steam and spray. It kept going for about 5 minutes before subsiding. It is a truly astonishing phenomenon. 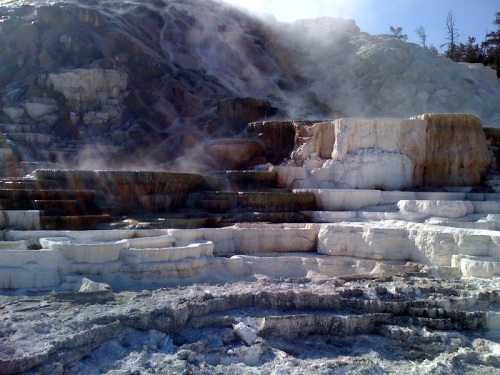 We also walked by strange pools of boiling mud, the sulphurous air catching in our throats. Another very odd place which we went to on the second day was called Mammoth Hot Springs, where the mineral rich water has poured out over the terrain, calcifying and creating terraces of white rock. Some of the hot pools were vivid greens, blues and browns where algae and various microbes had built colonies in the water and on the rock. It was all a bit surreal and unlike any terrain I had ever seen.

But other parts of the vast park were of incredible beauty. We drove alongside Lake Yellowstone, with a range of snow capped mountains making a perfect backdrop for the vivid blue lake. As we wound upwards through forests of conifers, snow covered the ground and added to the beauty. We stopped to look down over the edge of a deep canyon, where the Yellowstone River cuts through the rock and pours over some spectacular falls.

We ran out of superlatives, just amazed at the magnificence and the variety. The journey back to Missoula in Montana was also stunning, and I felt as if I was in a movie, a western of course, as we drove through grassy prairie land, intersected with rivers, and always ranges of mountains on the horizon. Back in Missoula, the autumn trees have lost some of their lustre, and the leaves are falling fast. It was great to meet up with some of the saints and enjoy a hot chilli con carne!