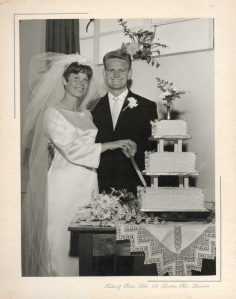 August 31st has significance for my family in several ways: it is the birthday of Hudson, one of our grandchildren; it is the birthday of my aunt who is 102 this year; and it is Terry’s and my wedding anniversary. We have clocked up 43 years. Written down like that it looks an enormous length of time, but it feels astonishing to me that so much time has elapsed yet seems to have passed so quickly.

Is it really 43 years since I was putting on my lovely white dress, full of joyful anticipation? The phone rang. It was Terry half way down the M1, saying the radiator of his borrowed car had blown up and he was stuck at Newport Pagnell with his best man, the best man’s wife and baby daughter. This was at about 12.30pm. The ceremony was at 2pm.

My already nervous father was dispatched in his car to race down the motorway, rescue them all, and try to get them to Leicester , all dressed and ready . Heroically, he did it. (Those were the years before speed cameras had been invented.)

So we duly had the ceremony, only slightly delayed. After our 17 month engagement, I was simply euphoric that at last the day had come and floated happily down the short aisle of our brethren assembly building, to my waiting bridegroom whom I hadn’t seen for several weeks.

At the end of the wedding, we had a slight dilemma. The car was languishing somewhere near Newport Pagnell: how were we to get to Wales where we had planned to have our honeymoon? This is where the resourceful Arnold Bell stepped in. He had been Terry’s room mate at Bible College, and had often jokingly enquired, “So: where are we going on your honeymoon then?”

This turned out to be no idle speculation. He now ran to the nearest phone box, (this was in the days before mobile phones were invented) and phoned a farmer in the village where he was doing a locum pastorate. His cottage was free!  So we the newly weds found ourselves leaving the wedding reception amid clouds of confetti in Arnold’s car as he drove us off toward Melton Mowbray. So we had an idyllic weekend in a quaint cottage with roses round the door. Eventually we made it to Wales as well, but we won’t go into that. (That was in the days before Christians felt free to stay in  hotels, so we were in a Christian guest house…. I think they have improved now. We hope.) You may think it was an inauspicious start, but as so often has been observed, a wedding is but a day; a marriage is for life. I made vows on that day that I meant with all my heart, and there were times when I had to remind myself that this marriage was not just about me and my preferences: it was about solemn promises to one another before God. (This was in the days before marriage prep. had been invented). So yes, there were many adjustments to be made but when those 2 human beings are seeking to put God first in the relationship and are learning to respond to him as well as each other, there is grace to grow, grace to love, grace to forgive.

In a world where marriage is cynically regarded as  just a bit of paper, where relationships end when the partners “fall out of love”, where they don’t know how to resolve differences, where there is sex but no friendship, where there is no respect, no laughter, no prayer….I am profoundly grateful that our marriage has been built on solid rock. I married a man who walks with God, and this makes me so secure.

My marriage is a rare and precious thing: it is not just a contract between a man and a woman; it is two people whom God has joined together to create a new thing, a unit that wasn’t there before. It is a relationship which has the supremely high calling of depicting a mystery, the sacrificial love which Christ has for his church, and her wholehearted response of love to him.

Christians: guard your marriage well! It has the potential to say something to the world about God himself! People should see our marriages and be in awe! They should see two people who are in love 43 years later, who love being together, never tire of each other’s company, live in harmony although they are very different personalities, laugh a lot, pray a lot, are generous in attitude, give grace to each other and are protective of each other, and of this most precious relationship.

Surprisingly, after a disappointing summer,  31st August this year was a warm sunny day. We had lunch at a pretty pub called the Golden Galleon, and then walked happily and contentedly hand-in-hand between the hedgerows down to the beach and back along by the Cuckmere river. The tide was high, and the water lapped gently on the banks; larks sang in the sky and sheep dotted the smooth rolling downs, basking in the  hazy afternoon. It was blissful. So we strolled, my love and I, not talking of anything very profound, but deeply enjoying the moment, together, thankful for love and life.

I am so glad that God invented marriage.